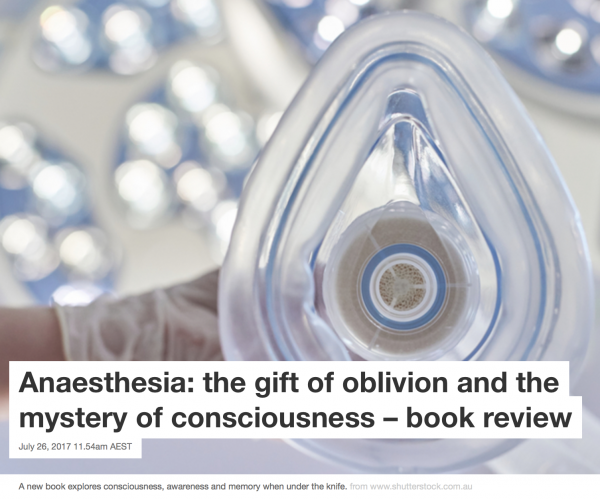 Anaesthetist Dr Kara Allen of Monash Simulation reviewed “Anaesthesia: the gift of oblivion and the mystery of consciousness”  – a new work by Kate Cole-Adams. Dr Allen’s review was written for theconversation.com.

The French refer to the emergence from general anaesthesia as “réanimation” – literally to restore consciousness. This is a crucial attribute – that consciousness will return following the desired period of oblivion. This is skilfully explored in Kate Cole-Adams’ book Anaesthesia.

Cole-Adams delves into questions about consciousness and self. Are we restored fully to self or does the experience of anaesthesia change us in a way that may not be measurable? The result is a nuanced, powerful book, grounded in Cole-Adams’ decision to undergo scoliosis surgery, and developed around the analogy of submerging in a bottomless sea and breaking into wakefulness like a swimmer surfacing from the depths.

Anaesthetists have a short time to establish rapport with a patient who is quite literally putting their life in our hands. We know our purpose is to provide unconsciousness and analgesia, so short-term harm can take place for long-term gain. Cole-Adams writes eloquently:

It is a form of denial that enables them to act upon us in ways that would otherwise be unthinkable. To ignore the ghostly griefs and joys and hopes that trail each of us into the operating rooms, and to get on with the vital business of slicing, splicing and excision.

Occasionally the book strays into the sensational, particularly with reference to studies investigating situations where people have become aware while under anaesthesia, but don’t have a memory of this happening. But predominantly, Cole-Adams writes compassionately and competently about the art and science of anaesthesia, and of practitioner and patient.

As a practitioner, it’s fascinating and beautifully written. Some 50% of the population of Australia and New Zealand are not sure that anaesthetists are doctors, so a book that outlines the contribution of a specialist anaesthetist is very welcome.

Much of Cole-Adams’ focus is on two of the biggest aims of anaethesia: rendering the person unaware of what is happening, and ensuring they don’t remember it later. She also explores the complex question of consciousness – if we don’t form memories of an experience, and have no detectable conscious perception at the time, does the experience cause us harm?

Awareness and recall under the knife

A large study found the number of patients aware during surgery was extremely low (measured by validated questionnaires administered after the operation), although some procedures (such as those with very large volumes of blood lost) and patients (such as those with severe heart or lung disease) were at higher risk than others.

Most cases were brief and not associated with distress or pain. Compassionate, timely disclosure of the events leading to the awareness and psychological support decreased long-term implications such as post-traumatic stress disorder, which could otherwise be severe.

She examines several “spooky little studies” that found people were aware under anaesthetic, but spends less time on the studies that failed to find evidence these things occur. The popular press like to focus on graphic and shocking stories, but it’s important to remember these are rare and extreme cases.

She also explores “perception under anaesthesia” – where a person may show a preference for certain words or images they heard or saw under anaesthesia. Studies have shown the overwhelming majority of patients have no detectable memories or evidence of consciousness under general anaesthesia.

And does it matter if someone perceives they’re in surgery while under anaesthetic if they don’t remember it afterwards? We don’t have enough information to say perception while undergoing surgery won’t affect someone psychologically if they don’t remember it. The process of surgery and post-operative recovery can all take a psychological and physical toll. It’s an interesting question, but almost impossible to answer.

Awareness is a rare but real problem that should be examined, whereas we’re not really sure perception under anaesthesia exists. And if it does, we don’t know if it would affect the patient at all since they have no memory of it.

Consciousness is a continuum – from drowsy through to completely inert. In situations where sedation is required, anaesthetists will administer drugs to cause amnesia, reduce pain and occasionally cause brief periods of unconsciousness. There are no hard and fast barriers between sedation and general anaesthesia – “deep sedation” often looks very much like general anaesthetic.

As consciousness recedes, harm to heart and lung function are more likely. This is particularly concerning when sedation is administered by health professionals without specialty training or indeed medical training. Only the term “specialist anaesthestist” is protected, so a less qualified person may administer anaesthesia or sedation, for example by the proceduralist in cosmetic surgery or dentistry. It’s one thing to put a patient to sleep; it may be a more difficult task to wake them up again.

This is fundamentally a story, not a scientific text, and has the potential to be slightly alarming for the uninitiated. We are fortunate in Australia that anaesthesia is extremely safe and highly reliable, but often there is emphasis on complications in the media. Cole-Adams has thought deeply about these topics, resulting in a book that is an exploration of the psychological, physiological and at times philosophical roles of anaesthesia and the implications for modern surgery.

For the interested reader, it’s an outline of the science, with an emphasis on the unknown. For the practitioner, it’s a patient experience, eloquently expressed. There’s much more to anaesthesia than meets the eye, and this book provides a glimpse into the depths. 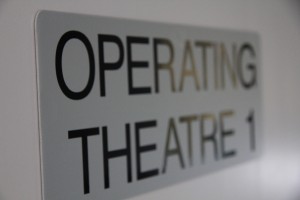